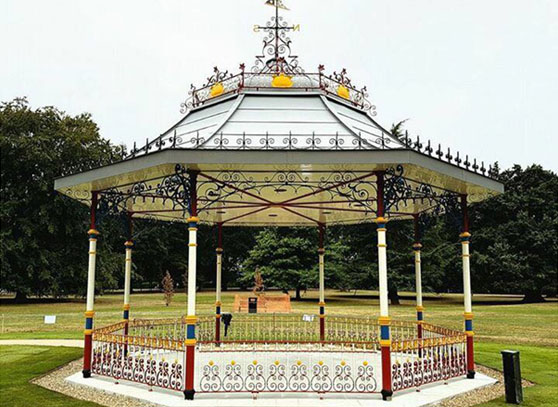 On Sunday September 4th, the restored bandstand in Cassiobury Park, Watford was officially reopened at a sparkling event which featured singing, dancing, several styles of music and a large crowd of happy people.
The project was judged to be such a success that an image of the bandstand now graces the cover of a book about bandstands by Paul Rabbitts, the UK's top bandstand expert. 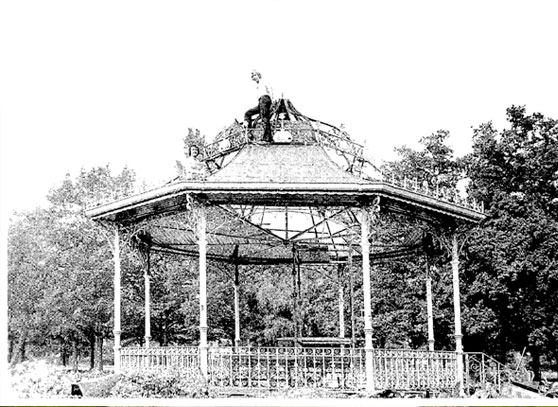 Installed in Cassiobury Park in 1912, the bandstand had once played host to concerts attended by well over 1000 people but as had become all too often the depressing story it was allowed to fall into disuse and disrepair. In the 1970s the whole bandstand was disassembled and moved to a location in the town centre and rebuilt but without many of the decorative and interesting features of the original. Once in place, the whole structure was, in the words of Watford’s Mayor, Elizabeth Thornhill, “slowly rotting for years outside the library”. She also commented “I can’t wait to see what the refurbished Bandstand is like – it was slowly rotting for years outside the Library, and it’ll be so good to celebrate its return to Cassiobury Park”. 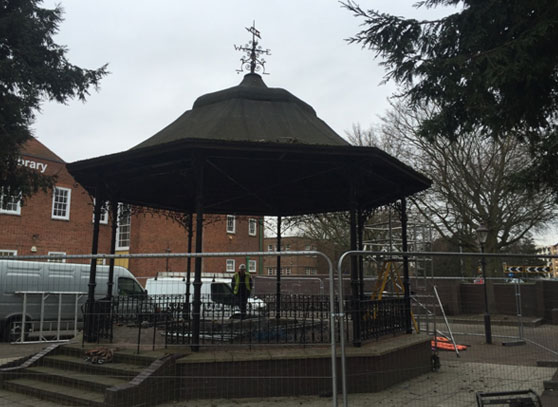 When we arrived to start the project, the bandstand was indeed in a fairly sorry state, neglected, largely forgotten and barely noticed, even by those people who walked past it every day. The first stage in the restoration and relocation project was to dismantle the bandstand, having identified all the remaining components and then transferring these back to the Lost Art workshop. 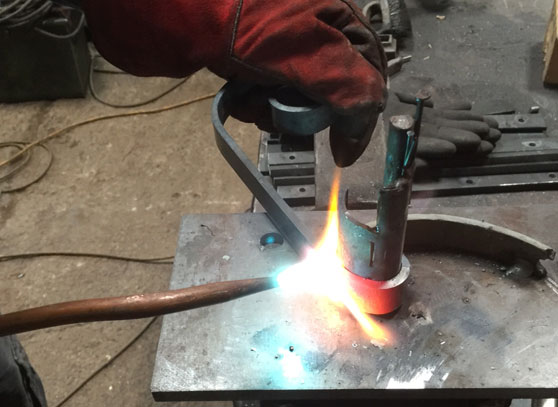 Cleaning and repair work was carried out to the remaining components, and missing pieces were identified and replacements produced – either in cast iron, with molten metal being poured into a mould, or with wrought iron, where the hot metal is shaped by hand held tools by a skilled worker. This particular design of bandstand includes a considerable amount of wrought iron in comparison with many other styles of the time, where the majority of components were produced using the forging process. The image shows the curling of a heated metal bar around a jig that determines the shape of the finished piece. 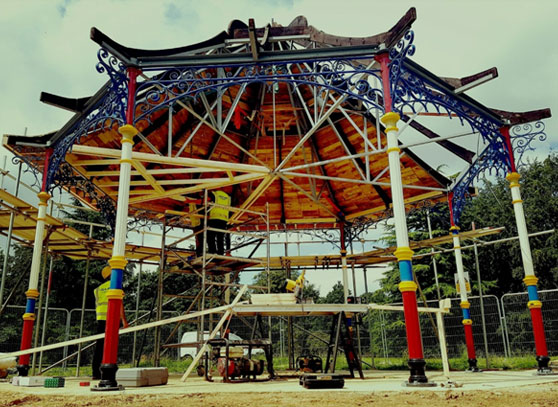 Once the works were well under way, we could also start painting those components that had already been cleaned, repaired or newly produced, according to a colour scheme supplied by the council. In addition, the vast majority of the roof materials required replacing, with new timbers and metal supports being integrated into the correct shapes for the elaborate roof structure.
Completion of the repairs to the structural elements of the bandstand allowed us to start on the reassembly back in its original home. 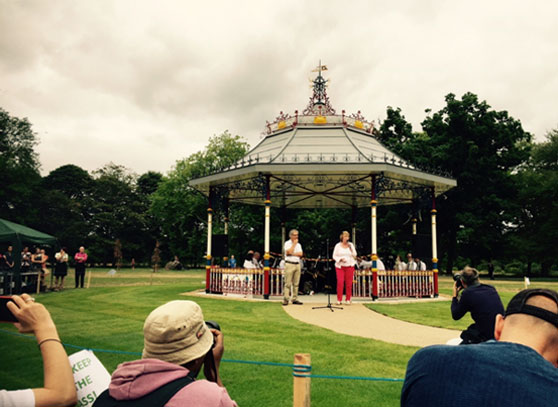 The opening ceremony for the bandstand started with speeches from Paul ‘Mr Bandstand’ Rabbitts and the Mayor of Watford during which Lost Art Limited employees were referred to as ‘National Treasures’ which is high praise indeed. 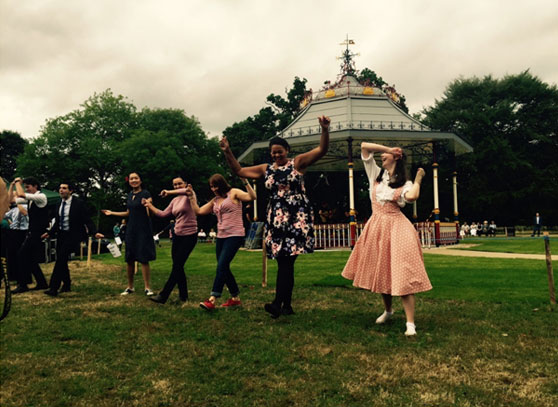 Following the speeches, the celebrations began in earnest for what we believe was another excellent example of a historic bandstand restored to former glory by the Lost Art Team. So much so that it will grace the cover of another bandstand book by Paul Rabbitts, to be published in 2017.

Restoration and Relocation of an historic Hill and Smith Company bandstand.

Watford’s bandstand was returned to its original position in Cassiobury Park – more than a hundred years since it was first unveiled.

The local press reported the project as:

The project is part of the £6.5 million restoration of the park – The bandstand is being restored by Lost Art Limited of Wigan, led by Managing Director Dominic Liptrot – who was presented to the Queen earlier this year, after recreating a Royal Bandstand in Windsor as part of her 90th birthday celebrations.

Paul Rabbitts, Head of Parks at Watford Council, who has written several books on the bandstands of Britain, said: “It’ll take a team of four people more than a month to put this Bandstand up and back into its original position in the park.

"A particular challenge is the roof, which is octagonal, and which has to perfectly marry up with each of the columns."

Elected Mayor Dorothy Thornhill said “I can’t wait to see what the refurbished Bandstand is like – it was slowly rotting for years outside the Library, and it’ll be so good to celebrate its return to Cassiobury Park.

The money for the restoration has come from lottery grants.

The opening of the bandstand took place on Sunday 4th August. At this pont the reporting was as follows:

"The Bandstand has been beautifully refurbished and is now installed in its original position near the Char Cafe.

The event included live music, dancing and workshops for children.

It’s taken six months of work by a team of experts who recreated a bandstand for the Queen, funding from the Heritage Lottery and Big Lottery funds, and the support of Watford Borough Council to make this happen. Now Watford’s historic bandstand will be re-opened, on the spot on which it was originally built, in Cassiobury Park.

The bandstand was originally opened in September 1912, and attracted crowds of more than 1,500 people. Then in the seventies it was moved to the square outside the Library.
When Watford Council won funding to revamp Cassiobury Park, returning the bandstand to its original position was part of the plan. Elected Mayor of Watford Dorothy Thornhill said "We’re committed to protecting Watford’s heritage, and the bandstand is an important part of Cassiobury Park’s history. I’m so pleased to see it return to its original site.I’m looking forward to seeing the bandstand in all its glory" 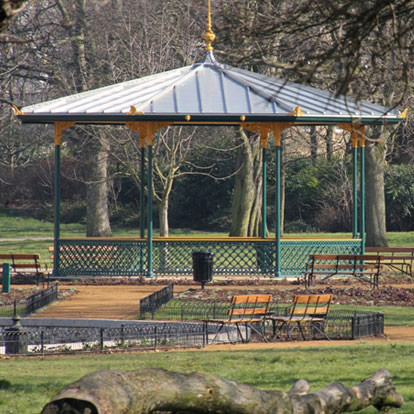 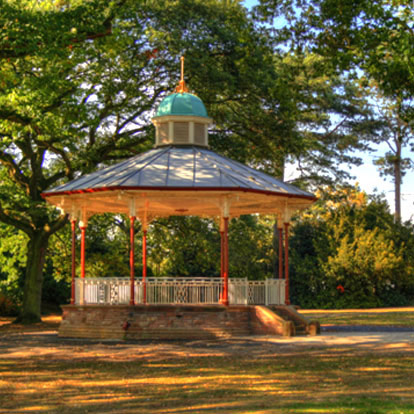 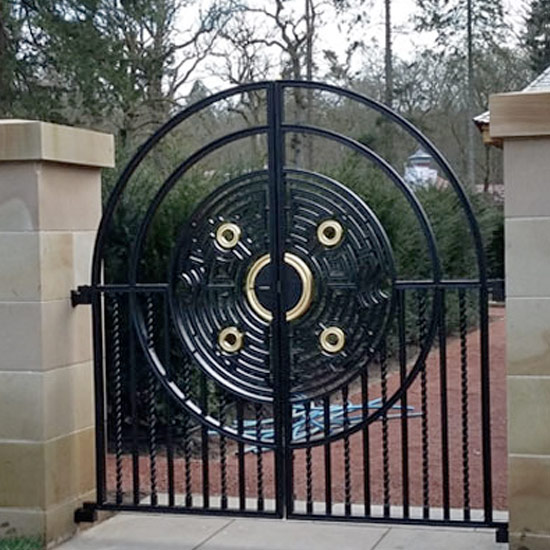 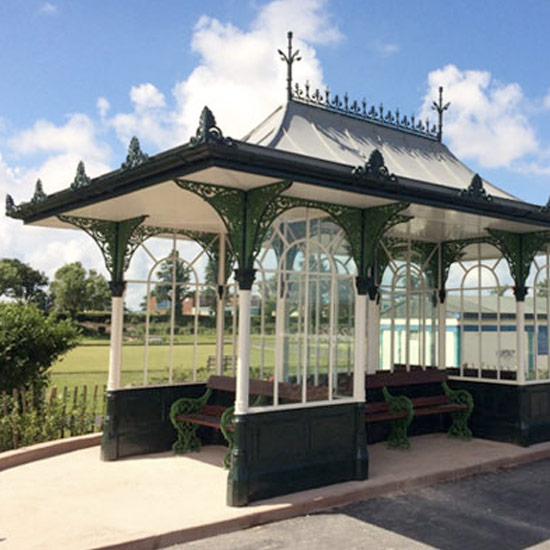