The following examples demonstrate how Lost Art, working together with our pattern maker and foundry have progressed through the pattern making process to casting and completion of a variety of projects. This is only a small selection of the large number of projects that we could have chosen, and further examples are available if so required. 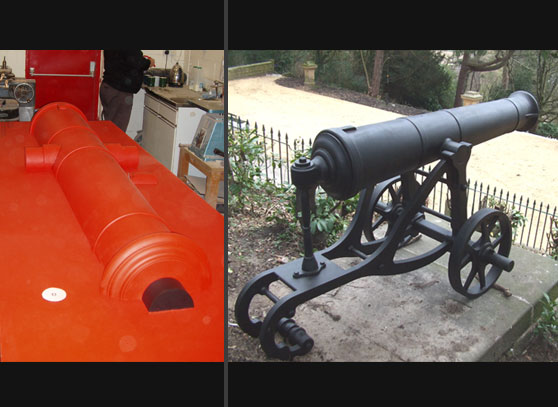 The image above shows a pattern being prepared for a pair of reproduction Crimean War cannons. The originals were liberated from Sebastapol and installed in AvenhamPark, Preston but were removed and melted for scrap in the 1960s. The newly created pair have been placed overlooking the River Ribble, symbolically protecting the City of Preston from invasion. 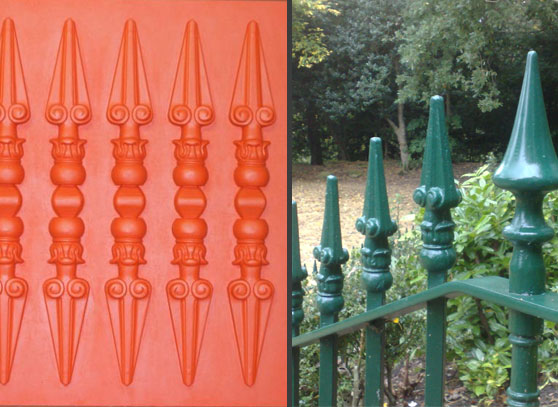 Lost Art, working with our pattern maker, produced the patterns for reproduction finials, which we then attached to railings and installed these in a number of locations throughout the park, including the surround of the cannon placement. 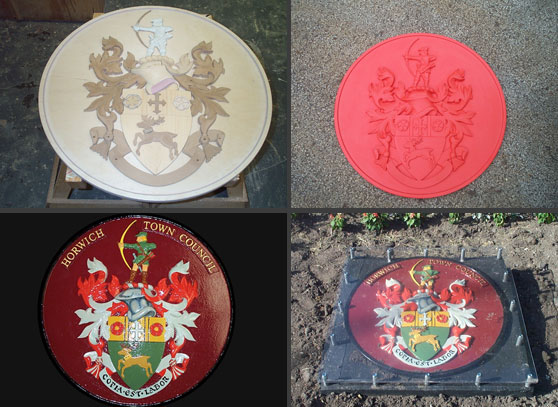 A further project that challenged the skill of our pattern maker was the production of a 2 metre diameter plaque in cast iron featuring the Horwich town crest and to be installed outside the civic building in the town.
The images show the original guide carving produced in wood, the high quality casting pattern that this yielded, the finished painted casting by our decorative artist and the finally installed plaque. 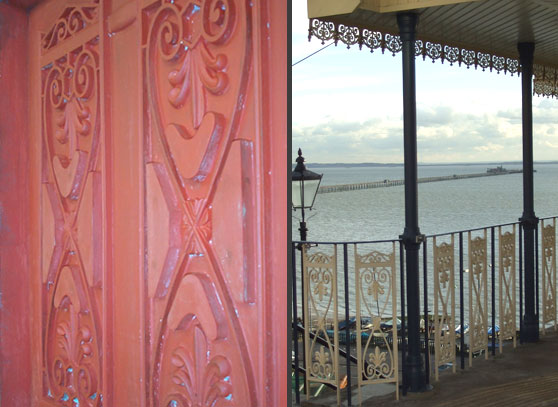 The images shows the pattern for a cast iron architectural panel with a further image of the cast panels installed at the Cliff Lift in Southend-on-Sea. 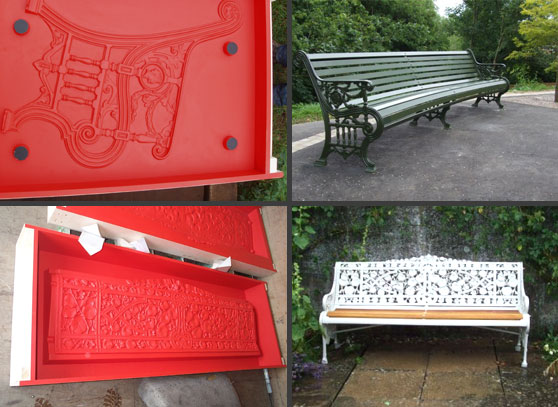 Benches are very much at the core of the Lost Art portfolio, and our patterns have been produced to the highest of standards, allowing for high definition in the castings and the retention of detail after receiving several coats of paint over a corrosion inhibition treatment.
The images show patterns for benches at The Walks, Kings Lynn and the finished benches plus the pattern for a cast panel for a reproduction Coalbrookdale Nasturtium pattern bench. 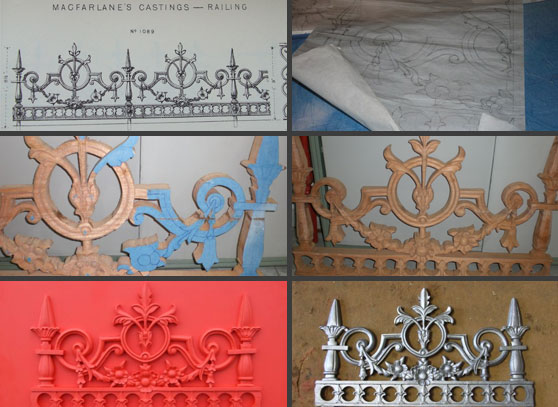 The bandstand, which had long since been demolished, was identified as having originally been produced by the MacFarlane Company of Glasgow. Research using a number of sources enabled Lost Art to identify a number of components shown as illustrations in archived editions of the MacFarlane company catalogues.
Using the illustrations as a basis, in the example shown above of a cast panel to be incorporated into the roof of the bandstand, the pattern makes first worked with a wood carver to produce a working scaled drawing of the panel.
Once this had been finalised the drawing was attached to a suitable piece of wood and used as a guide for the carving process.
This yielded a positive carved example of the panel which was then passed to the pattern maker to produce the actual pattern to be used at the foundry for the making of the mould from which the actual castings were then produced.
The castings produced from the patterns were crisp and clean, showing a high level of detail and were an excellent reflection of the quality of the pattern making.
In other instances, photographs of the missing bandstand were used as the basis for the drawings, which could be scaled using a comparison of the relative sizes of the components needed to that of known components also shown in the photographs.
We would expect to make use of these processes to produce patterns for any components required for either the bandstand or the pavilion, unless examples of the components are available from which a direct mould lift can be taken. An example of this may be the brackets to the canopy of the pavilion entrance where sections are missing but other examples of the same casting remain.

In recent years, Lost Art Limited has developed a considerable degree of expertise in development and restoration work involving the production, preparation and installation of high quality castings in iron. Although to some extent this is a reflection of the skills of the workers at our partner foundry, much of the credit has to go to Martyn Jolley, Lost Art Limited’s patternmaker of choice.

The patternmaker produces template models, which are used to create moulds for casting metal in foundries. These are made from a variety of materials, but typically are produced in wood or resin.

The process of producing a pattern involves a number of steps, these include;

A degree of both manual and mathematical precision are required to produce a clean, accurate pattern and to set tolerance levels to take account of molten metal shrinking as it cools during the casting process.

A good pattern maker will possess a number of attributes including;