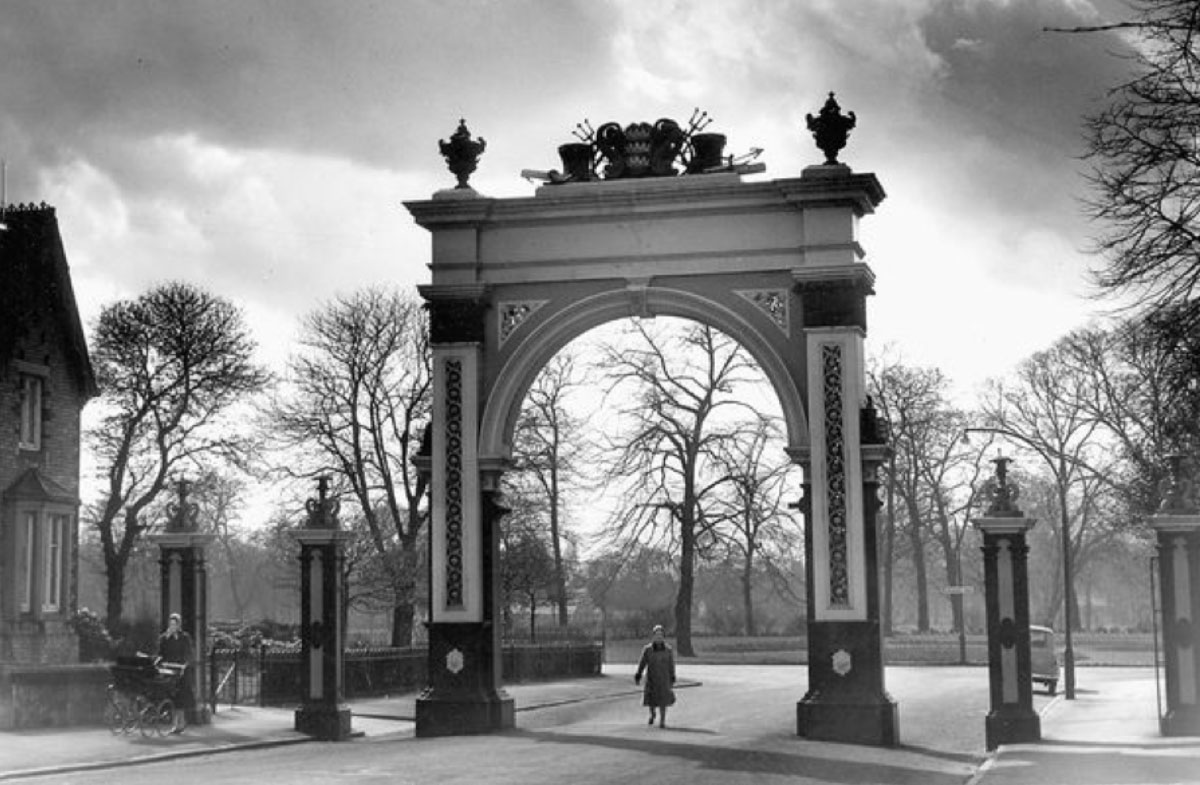 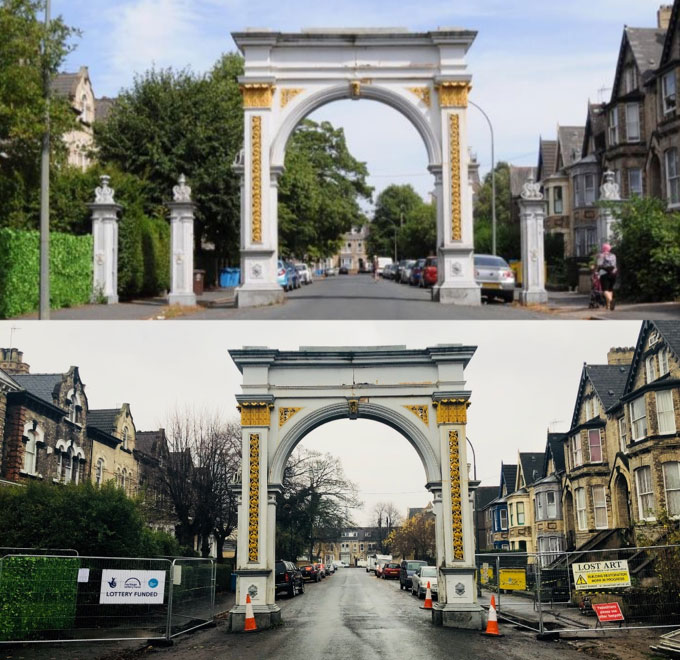 As main contractors, working to deadlines, we managed a multidisciplinary team, maintained control of H&S, legal compliance issues, plus project scheduling, trade integration and cost maintenance, bringing the project in on budget.

The structure was found to be in a rather worse condition than a previous report had suggested and required extensive restoration, not least in relation to previous poor-quality repairs which is unfortunately a theme often found in restoration projects.

Lost Art Limited were commissioned to undertake the full restoration of the Pearson Park Entrance Archway. Constructed in cast iron, installed in 1863, it is a listed structure, one of two remaining in the UK. The project required full dismantling of the structure, transport to the workshop, full restoration, with as much of the structure to be retained and reused as possible, in keeping with good conservation ethos, production of replacement parts for any missing or damaged beyond repair, including the whole maritime themed decorative feature on the top of the archway, requiring use of historical documents and extensive research. This was followed by reinstallation after hard landscaping, road surfacing & utilities work.

To some extent, the project could be seen as a microcosm of all restoration projects, progressing in identifiable stages:

Additionally, we designed, produced & installed additional structural elements, an important consideration given that the structure had originally been constructed only to allow the passage of horse-drawn vehicles, rather than modern day motorised traffic. It had also been noted that a previous collision with a horse-drawn cart had caused considerable structural damage and therefore it was important to improve the resilience of the structure in this respect whilst adhering to good conservation practice.

Professionalism and continuous professional development were demonstrated through liaison with client and funding representatives. In addition to practical techniques developed and recommended to the client, we also developed and delivered social engagement projects to a range of stakeholders – provision that the client has described as establishing the gold standard for future projects. This was augmented by regular liaison with the project team and the submission of well received update reports, collated and presented in such a manner that members of the project team at all levels of technical expertise were made aware of the processes, procedures and progress, as well as measuring providing information against the expected schedule. This became increasingly important as the extent of the damage and deterioration to the structure became apparent, including the finding that the top of the structure had been filled with concrete and required considerable work to have this removed. 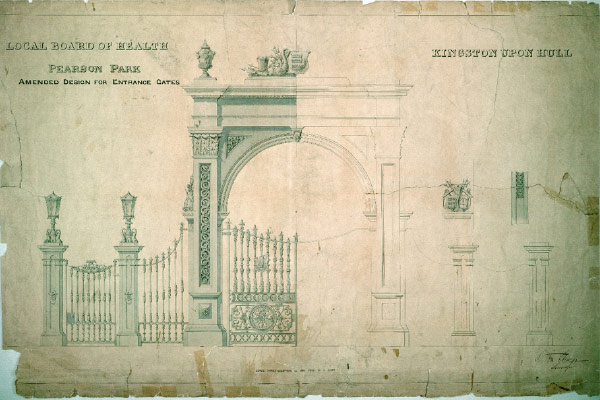 The gates had to be completely reproduced from historical documents, comprising original illustrations and photographic evidence from postcards. 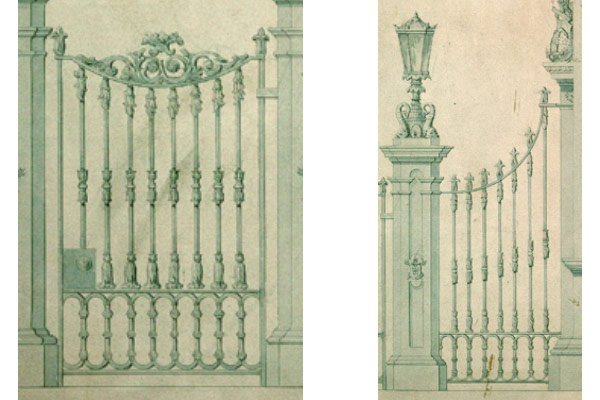 Using the visual evidence from the drawings and photographs and the physical evidence of the remaining archway structure, it was possible to produce scale drawings of the gates and of the individual components within the larger gate structures. As the decorative elements of the gates were of cast iron, rather than the wrought iron frames, it was necessary to produce casting patterns for each of the individual component types. 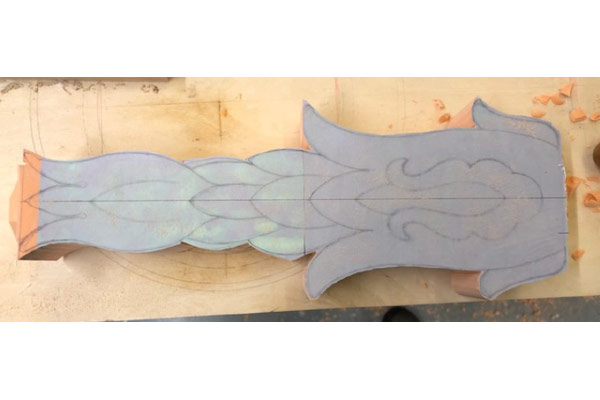 From the scaled drawings of the gates, wooden carvings were produced for each component. From these the boxed patterns were produced. Once these had been approved by the client, the patterns were transported to the foundry and the required numbers of each component were cast. It was important to use an approved foundry as there was a requirement for high quality castings with crisp and clear detail. 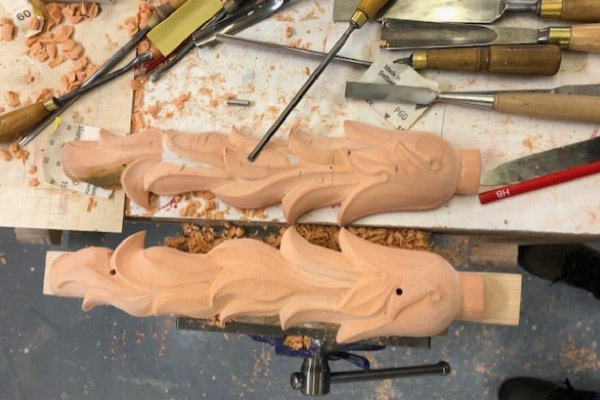 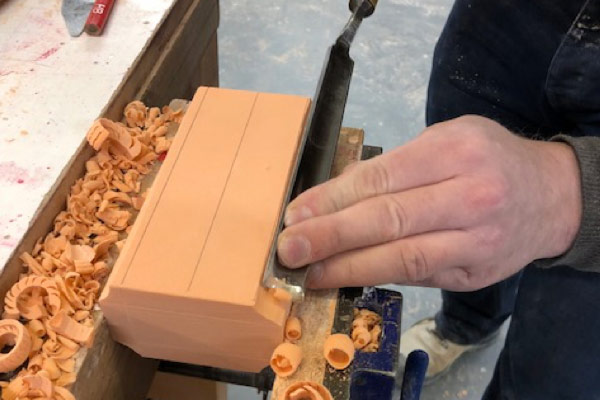 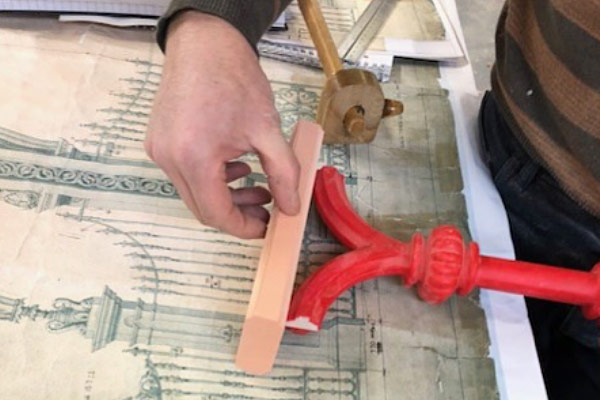 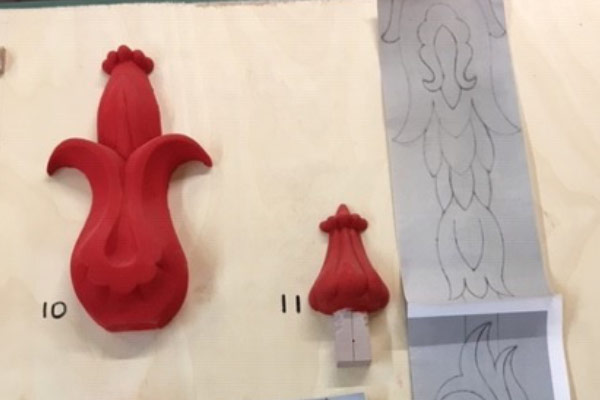 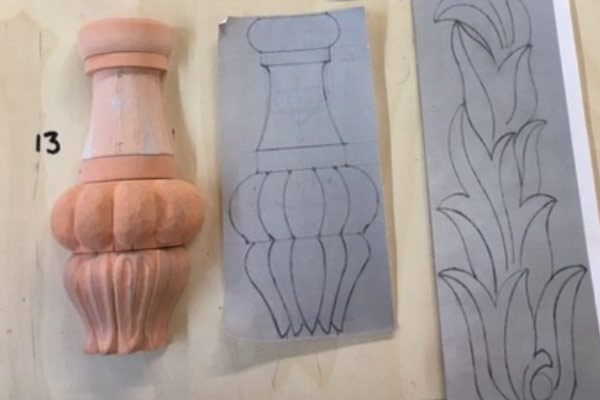 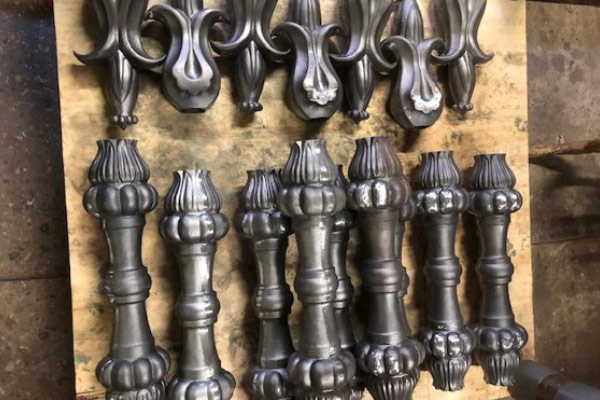 The castings were transported back to the workshop for a final clean and fettle. 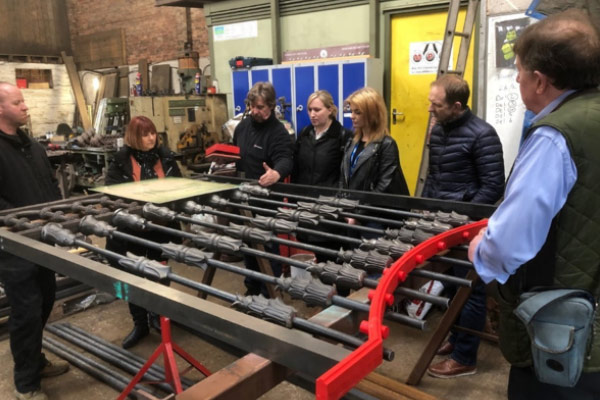 Test assemblies and then painting using the approved system, prior to full assembly of the gates. 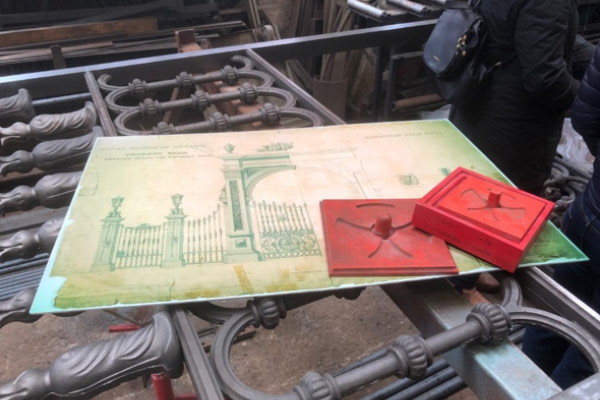 The processes were fully documented and formed part of an exhibition at the time of the opening ceremony and also the basis of presentations to stakeholder groups as part of a social engagement programme. 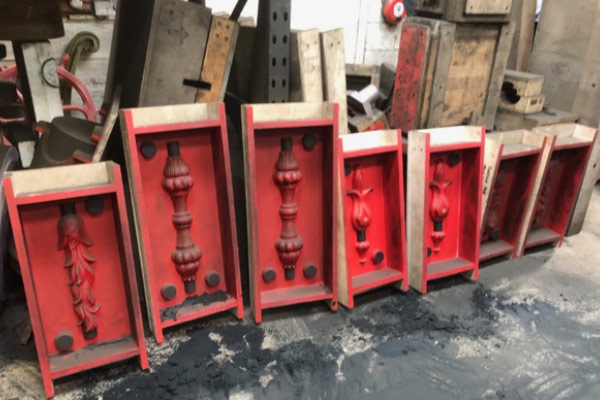 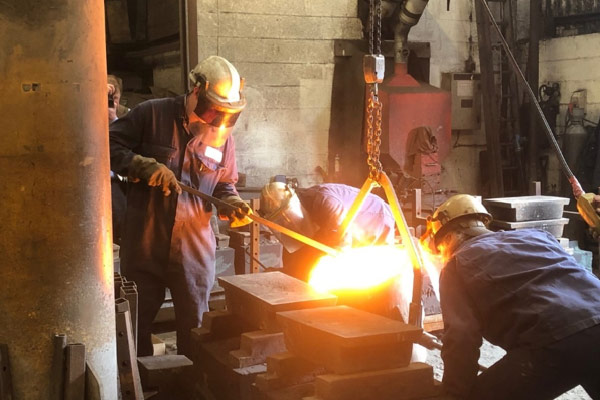 Castings being produced at the foundry.

Running alongside the restoration of the main structure and part of the contract was the production of replacement gates, comprising the main gates, the pedestrian gates and the side panels/screens. Unlike the main archway, the original gates were no longer in position, having been removed at some time previously. This meant that the gates had to be completely reproduced from historical documents, comprising original illustrations and photographic evidence from postcards. This also applied to the reproduction of the maritime themed decorations to the top of the archway. This had been completely lost. We produced patterns based on historical drawings and photographs and these we used to produce the castings that were combined to complete the decorations to the top of the archway. This was also done for the urns on the top of the archway. The results can be seen in the photos below.

Once fully assembled, the gates and side screen panels were returned to site where they were installed within the structure of the archway.

Given the size and location of the project, other aspects of the work were controlled by lost Art Limited, including site set up and security, traffic management permissions and implementation, hard landscaping at the site and liaison with utility companies regarding excavations and installation of power supplies to the newly installed lighting. Lost Art also designed, produced and installed bollards that protect the structure as there is a volume of traffic that passes through it on a daily basis. 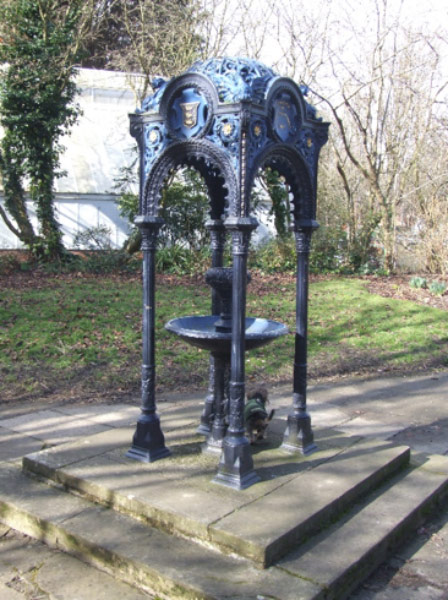 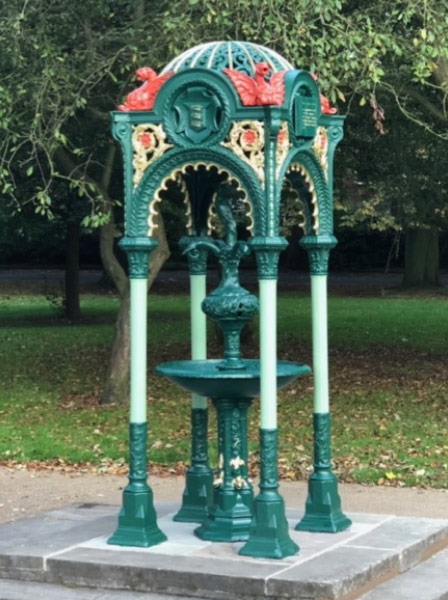 As with the Archway, this required the complete dismantling of the structure (following full record keeping of the condition of the fountain) and return to the workshop. In keeping with good conservation practice, following a full cleaning of the component parts of the fountain, we were able to identify

As ever, the concern was to retain and reuse as much of the original structure as was possible.

In order to replace missing elements of the structure, new castings were required and for this new patterns had to be produced. In order to ensure that these were identical to those missing from the original structure, we were able to negotiate an element of quid pro quo with Northumberland County Council. We had previously fully restored an identical drinking fountain in Sele Park, Hexham and we were able to ‘borrow’ the required components from the restored fountain, in order to use them as the basis for casting patterns and moulds, in return for a cleaning of their fountain.

The new components were produced and in keeping with conservation practice are both recorded and identified as such on the castings. These were incorporated into the repaired and restored fountain components, subjected to high quality preparation using our heat-based approach in order to provide the best possible basis for the painting process and ongoing corrosion protection and lowered maintenance legacy.

As an alternative approach, where we restored and relocated the Burns Memorial Drinking Fountain in Dalkeith, we replaced larger missing elements by producing patterns based on digital 3D scanning of an existing and matching fountain – a technique we have used on a number of occasions and on which 2 of our employees have contributed to an academic journal article currently in press. 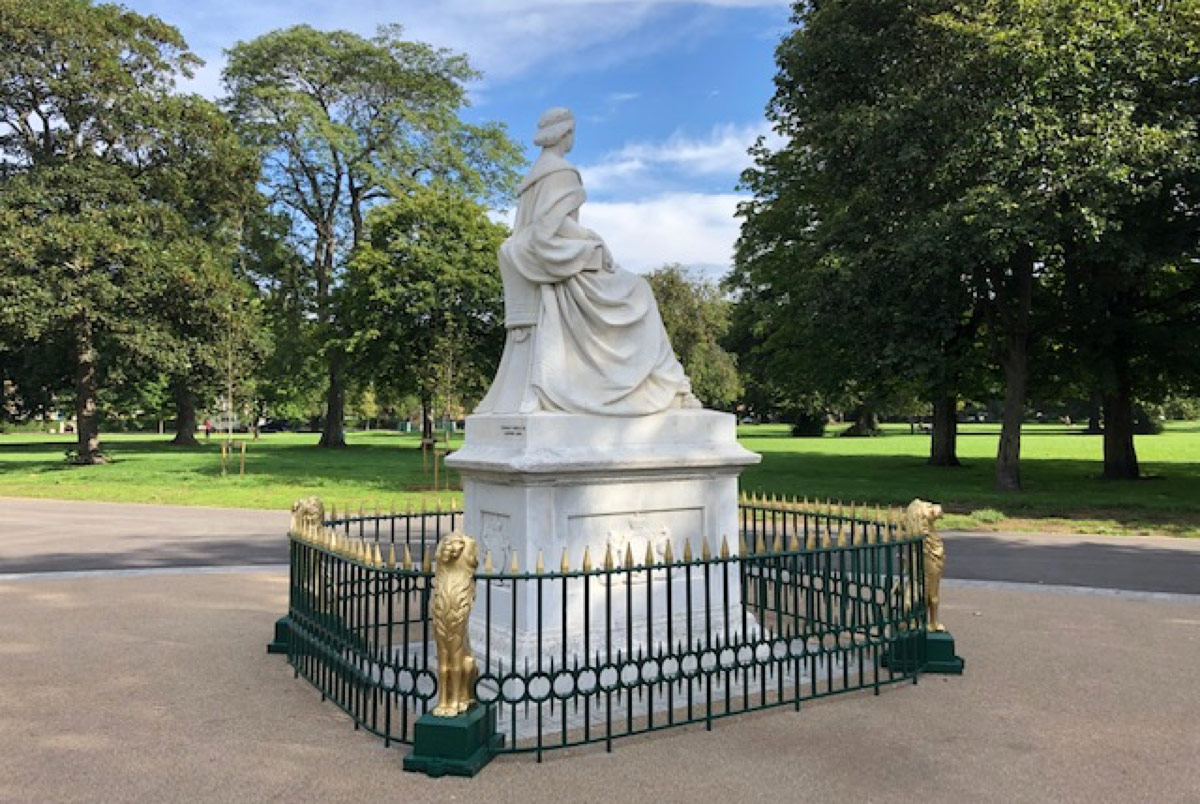 Additionally, we also restored the historic and unusual, decorative cast and wrought iron railings surrounding the Victoria Statue and provided the replica Victorian cast iron and timber benches installed within the park. 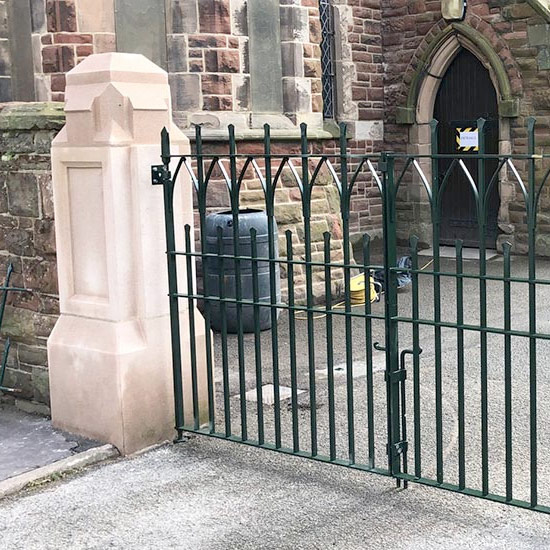 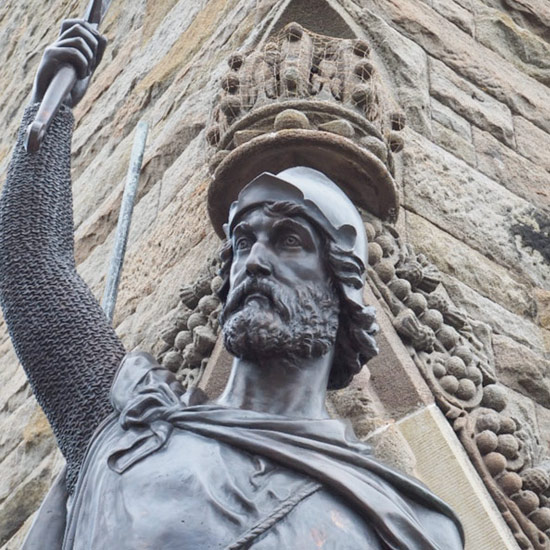 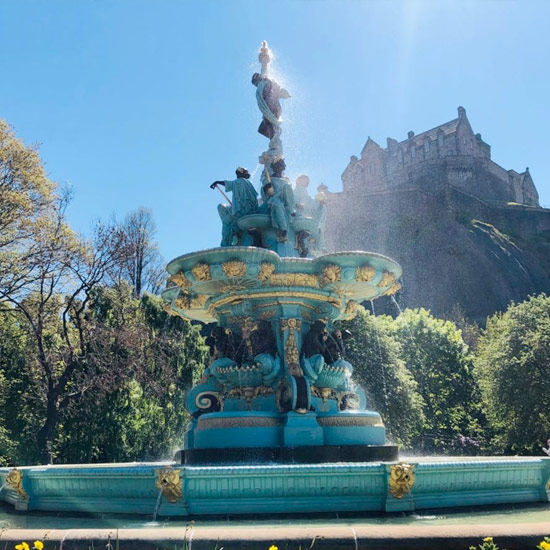 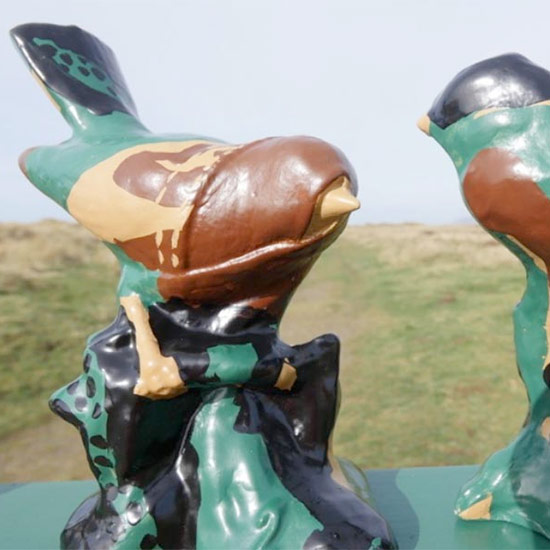